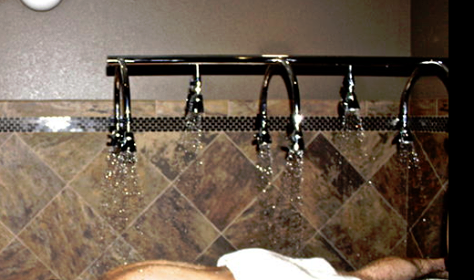 Not usually found in smaller spas, and that’s why we have one, the Vichy shower is a metal arm with multiple shower heads that run parallel to a cushioned table. The Vichy shower is part of our body treatments. Imagine, you are getting a body wrap, like our Caribbean Therapy Wrap or a Body Polish, and instead of getting up and making your way to the shower, you are already laying down in the shower. Multiple shower heads gently rinse your body as if you were in a tropical rainstorm or as some people describe it, gives you the feeling of floating on water.

The effect of the water movement on your skin is to increase blood circulation, hydrate your skin and soothe your nerves. You’ll find out that your body is better balanced as your muscles relax. The products used in your body treatment can also be absorbed better and more effective.
Have you ever noticed how much better you feel when you are around water? Maybe you go to the lake or the ocean. Even a summer downpour can change most people’s moods. The Vichy Shower is the closest water treatment available in North Dakota that would be akin to a waterfall pouring over your body.

At the Broadway Centre Spa & Salon, we didn’t stop at the Vichy Shower, we also have his and hers steam showers that can hold multiple people in each room. Steam Showers use the concept of wet heat, unlike a sauna that is dry heat. The humidity of a steam shower can relieve the effects of bronchitis or asthma, and works at a temperature that is lower than a sauna. Perfect for those that feel the heat in a sauna is too much.
A steam shower is perfect for opening the pores of the skin just before a body treatment to allow the products to have optimal effect. At the Broadway Centre Spa & Salon, you receive a complimentary steam shower with any spa service.

Grab a friend or your significant other and experience all that the Broadway Centre Spa & Salon has to offer. Our “Better Together” package is perfect, you both get a steam shower, a together Broadway Massage and a Couples Broadway pedicure. The perfect way to spend a day together.